Special lottery draws offer unique opportunities to win larger prizes than usual. Many lotto games have these super-draws once or twice per year, but probably not of them are close to the popularity of Lotería de Navidad.

Also known as the Spanish Christmas Lottery, this game offers the biggest overall prize pool in the history of lotto. Players receive €2.4 billion with the main prize to be won placed at €4 million. Keep reading to discover other things that make this lottery unique and why you should play it!

When Did the Spanish Christmas Lottery Start?

Lotería de Navidad is traditionally held around Christmas. For the current year, the drawing will be on Tuesday, 22 December 2022. The actual draw ceremony lasts for hours since it is a big event for the entire country.

Is it your lucky YEAR?
Buy Lotería de Navidad Tickets 2022

What Is Special about the Christmas Lottery in Spain?

The draw of the Spanish Christmas Lottery is a huge event followed by millions. It is held at Teatro Real in Madrid. During the event, pupils from a school sing the results. For decades, they have been choosing pupils from the San Ildefonso School in Madrid. Lotería de Navidad draws also have an audience. They often wear hats and dress lottery-related outfits.

You have two drums (or cages) that draw the balls. The first one contains 100,000 wooden balls that contain the digits found on ticket numbers. As for the second drum, it contains around 1,800 wooden balls. They all have the prizes written, and 1,794 balls are consolation prizes.

The draw lasts for hours because it is a big event, but also because it takes time to draw all prizes this way. It is the children that draw the balls, and the drums are not automated.

How Does Spanish Christmas Lottery Work?

Lotería de Navidad doesn’t work as a standard lottery. That means you don’t get to choose the combination of numbers.

Instead, you buy a ticket with a pre-determined code. The code always has five numbers and can be anywhere from 00000 to 99999. The numbers tell us that there are 100,000 tickets in a single series.

However, the interest of Lotería de Navidad is much higher. That is why the organizers decided to print tickets in multiple series. It is expected that there will be 172 series in 2022.

That means that the total number of tickets will be:

But that is not the end!

Apart from multiple series, each ticket also has multiple shares. That means you don’t buy an entire ticket at once. Rather, you buy a single fraction of a ticket, which qualifies you for a portion of the prize. The more shares you have, the higher your total prize will be.

How Many Shares of the Same Number Are There in the Lotería de Navidad?

Each lottery ticket for Lotería de Navidad has ten shares. That means there will be ten tickets with the same number to purchase. However, they will have different “shares” or “decimos.” That is the term used in Spain for ticket fractions.

If you think of it, this means that there are actually 172 million shares available for each special draw. The more shares you have, the higher the potential win.

You might be wondering why the Spanish Christmas Lottery implements shares. The reason is that they want there to be as many winners as possible. It is the lottery with the highest prize pool ever, but the goal isn’t in giving the largest reward. The focus is on making as many people happy, which is in line with the holiday spirit.

Buying lottery tickets online allows you to play this game from anywhere in the world. You can purchase tickets for Lotería de Navidad in a couple of minutes, and here is how:

Here is how your Lotería de Navidad ticket should look: 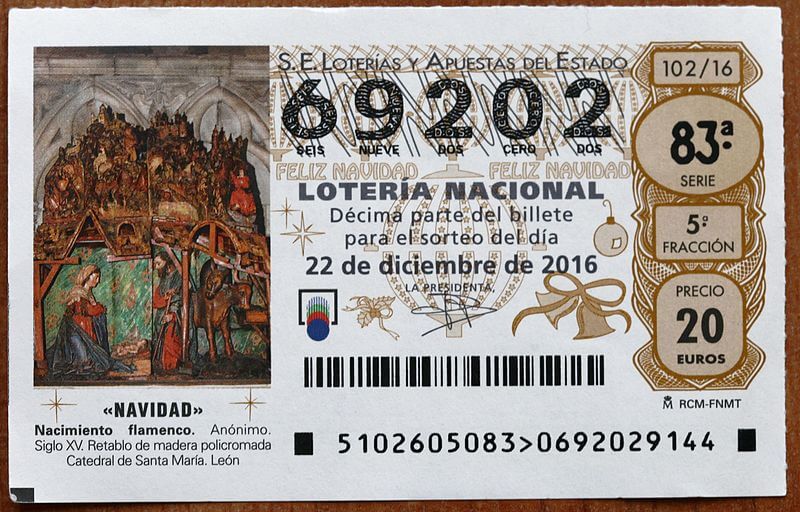 The design might change, but numbers are what’s important. Now, let’s take a look at the explanation of those numbers:

How Much Can You Win in the Spanish Christmas Lottery?

Lotería de Navidad has a fund of €14 million per series. Since there are usually around 170 different series, multiplying the numbers brings us to a total fund of €2.4 billion. That is the biggest fund for a single draw in the history of the lottery. It is even bigger than for US Powerball and Mega Millions.

The main prize in the Spanish Christmas Lottery is famous as the Fat One (El Gordo). It is set to €4 million, and there is a single winning ticket per series.

Here is the reward structure for a single series of tickets:

What Are the Chances of Winning the Christmas Lottery?

The overall odds of winning a prize in Lotería de Navidad are 1:6.5. Your chances of nailing the prize are better than in Spain La Primitiva, and even Canada Lotto 6/49.

As for the jackpot odds, they are placed at 1:100,000. That is more than decent, and better than in most games, including small lotteries like Texas Cash Five. It is worth noticing that the odds for the first three prizes are the same, although their sums are different.

How Do I Claim My Lottery Winnings in Spain?

You have 90 days to claim your prizes. If you claim at a local retailer, ONCE kiosks are the place where to collect small rewards. However, you will need to claim bigger ones at the Bank of Spin.

Those who play online should expect the funds in their account soon after the draw. You will be informed if you need to collect a large prize in person.

What to Do If You Win the Christmas Lottery?

The first thing you should do is to celebrate! It is not easy to win the lottery, but you managed it.

Here are some other tips to consider what to do when you win:

What Is the Christmas Raffle in Spain?

The first Lotería de Navidad draw took place in 1812 in Cadiz. That means this game has a history of over 200 years, although it has been known under a different name at the time. The term Christmas Lottery was coined in 1892 and showed on tickets five days later.

It is a tradition that the children draw the results. The kids come from the San Ildefonso School, and both male and female students participate. It wasn’t the case until 1984 as only male students took part in the draw until then.

What Happens in the Spanish Christmas Lottery Drawing Day?

National television emits the draw live on its channel, which means the entire country can watch it. The draw usually starts early, although it depends on the program scheme. It is not uncommon for entire families to gather and watch the draw together. While doing that, they might enjoy food and drinks.

Lotería de Navidad draws guarantee a spectacle. Children get to the scene to draw the balls. They start by pulling a single ball to decide the winning ticket number. After that, they move to the second spherical drum to pull out a ball that decides the prize. Most kids will sing the results and say something like, “the ball 34,567 wins €1 million!”

Is it your lucky YEAR?
Buy Lotería de Navidad Tickets 2022

❓ How much money can you win in the Spanish Christmas lottery?

The first prize at Lotería de Navidad is always €4 million. This special draw gives 172 jackpot rewards, and they are all equal.

❓ What is the difference between the Lotería de Navidad and the “Spanish Christmas Lottery”?

There is no difference between the two – Lotería de Navidad is the local name for the Spanish Christmas Lottery.

❓ Can a foreigner win the Spanish lottery?

Yes, you can participate in this lottery even if you are a foreigner. The easiest way is to buy tickets online.

❓ How much does the Spanish lottery give out in total?

The total prize pool for the Spanish Christmas Lottery is €2.4 billion. That is the largest reward fund per single drawing in the world.

Yes, Lotería de Navidad is extremely popular in Spain. People there consider it a part of the holiday tradition to play this lottery.

❓ Is the payout guaranteed?

Yes, all payouts in Lotería de Navidad are guaranteed. This is a long-running lottery that is very reputable, and that is partly because they pay all prizes on time.

❓How much tax do you pay on lottery winnings in Spain?

Why Is worth Buying Lottery Tickets for Spanish Christmas?

What makes Loteria de Navidad special is its uniqueness. You only have a single opportunity per year to play this lottery, and you shouldn’t miss it. Spanish Christmas Lottery gives one of the best overall odds of winning a prize, and you have a good chance of winning the jackpot, too. Whether you want to try a lottery with a unique concept or aim for tempting rewards, this game is worth playing!