Skip to content
Lottery 'n Go » Blog » The History of the Lottery: How It All Begins

If you are a passionate lottery fan, you might want to know more about the game’s history. Have you ever wondered how the lotto began and where it originated?

The lottery has a rich history, and we are revealing it in this guide. We’ll cover everything from the ancient world to modern days. If you are ready, let’s head on this fantastic journey and learn more about lotto history!

The first lotteries were different than the ones we play today. They reminded of keno or required people to guess statistical information. Here is a brief overview of the important lottery eras:

Did you know that lottery has been around for over 2,000 years? According to historians, we can trace the first lottery to Chine. The Western Han Dynasty was the first to organize the “white pigeon game.” The closest thing to compare to it today would be keno. The specific name comes from the way of delivering results. Chinese attached papers with results to white pigeons and delivered them to distant locations. The reports even indicate that a portion of the profit helped to build the Great Wall of China, which is a symbol of this country even today.

The Ancient Greeks didn’t organize lottery for citizens. However, they used a random system to pick their leaders! They believe this was true democracy since there was no room for corruption and rigging. They designed a device called kleroterion. It involved using a stone slab with tokens for citizens who want to participate. The winners would get the privilege to work in the city council.

There’s evidence that shows that lotteries were popular in Ancient Rome. The first ones to play these games were the members of the elite. They organized dinner parties where visitors could participate in special draws. The lucky winners received gifts from the host. Many believe that these lotteries had a high chance of being rigged, so the prizes go to the influential guests or someone close to the hosts!

The citizens of Rome could participate in lotteries during the rule of Cesar Augustus. Octavian used loot won from the wars as prizes for the lottery. A portion of the money acquired this way was reinvested to rebuild and expand Rome.

Although lotteries were played from before Christ, it was in the Middle Ages when this term was first used. According to the reports, the word “lot” was coined by the Dutch and Belgians in the 15th century. The news about this new “game” spread quickly to other European countries.

Venice, Rome, and Florence were among the cities that started organizing lotteries. The governments saw this as a simple method of collecting money to fund road building and other public projects. Some lot-based games were even schemes organized by individuals. The rewards varied from cash to properties and merchandise like jewels and carpets.

It was Queen Elizabeth who first organized a national lottery in 1569. She had the same idea of collecting money for the “interest of the public.” A single ticket for the Queen’s lottery cost ten shillings, which were expensive. The prizes included linens, tapestries, plates, and cash. There were 10,000 rewards distributed, and the Queen picked the winning balls herself!

A lottery trend appeared in France later. In the 17th century, many small towns joined and organized lotteries together. Their goal was to raise money to build defensive structures. The French believed fairness was guaranteed if a blind child drew the winning numbers!

King Louis XVI understood the potential of lotteries. He banned all other forms and started a national lotto. From 1776 to the French Revolution, lotteries were organized regularly. The trend continued after the Revolution, but France stopped all lotto games in 1836. The reason was that it exploited those with low incomes. The national lottery returned in the 1930s.

Portugal was another country that started its lotteries in the 18th century. Loteria Clasica originated as a sweepstakes competition to raise money for the public interest. The country built the Royal Academy of Sciences and the Royal Hospital in Lisbon with this money.

This is one of the earliest lotteries that’s still active. The synonym for El Gordo is “the fat one,” which should imply how large the main reward is. The first draw occurred in 1812, and the reason behind it was that the Spanish government lacked the money to compensate for high war costs.

The government organized everything perfectly. The gold pots were used for the drawing, and orphan boys picked lucky numbers. The special session occurred around Christmas and quickly became a tradition. Today, you can’t imagine this holiday in Spain without El Gordo.

The Lotteries Arrive in the United States

The first US lottery occurred in 1655. It involved a competition where you had to be the closest to the number of bibles sold in New York. You could also find them in other colonies, such as Massachusetts. The Continental Congress organized a lottery in 1776 to raise funds for the Revolution.

The fantastic thing about the lottery is that (almost) the entire world plays it these days. You’ll find regional, state, national, and continental games. Thanks to the internet, you can purchase tickets for the lottery held on the other side of the globe. Here is an overview of the most popular games by continent!

You can track the modern lottery in the US to 1964. The game involved guessing the results of a horse race. It only took a decade for the New Jersey Lottery to implement a game with computerized numbers.

The United States is a home to the biggest lotteries of today’s time. Those are US Powerball and MegaMillions. They offer a generous jackpot fund and exciting two-drum concepts. That makes them popular beyond the US and continental borders.

You’ll also find many state lotteries in the USA. Some popular games include New York Lotto and Lotto Texas. The prizes aren’t as tempting as in national lotteries, but the fund is still quite generous.

As for other countries, the Canadians enjoy their version of Lotto 6/49 for decades. The game has a simple concept and an impressive tradition. That makes it impressive for both beginners and advanced players.

National lotteries throughout Europe have a long tradition. The huge majority of the countries have at least one lotto game, and many are available online to international players. The biggest prizes are in national lotteries organized by big countries. You’ll often find a jackpot of over €30 million in Germany Lotto, and France Lotto also offers tempting prizes.

Camelot is the company that organizes most British lotto games. The most popular one is the UK National Lottery. You can also try Ireland Daily Million since it offers daily draws and a unique concept.

At the beginning of the 21st century, European countries joined to launch continental lotteries. The first one was EuroMillions, which now gathers 13 countries as co-organizers. Another game was launched in 2012, and it’s EuroJackpot. It gained popularity quickly, and 18 countries participate in this game today.

Asia also has many lotteries that are fun to play. For example, Loto 7 Japan attracts many players with its 7+2/59 concept. It involves standard and bonus balls and even has a maximum cap. That means the win is guaranteed once the jackpot reaches JPY1,000,000,000.

As for the rest of Asia, India has 13 states where it’s legal to play the lotto. You can choose from the Government lotteries, and many have sessions and special draws with more tempting prizes.

Australia has its version of Powerball Lotto. The prizes can’t compare to the American PB, but the jackpot is still attractive. You can also enjoy the Australian Saturday Lotto and games that have sessions on weekdays. 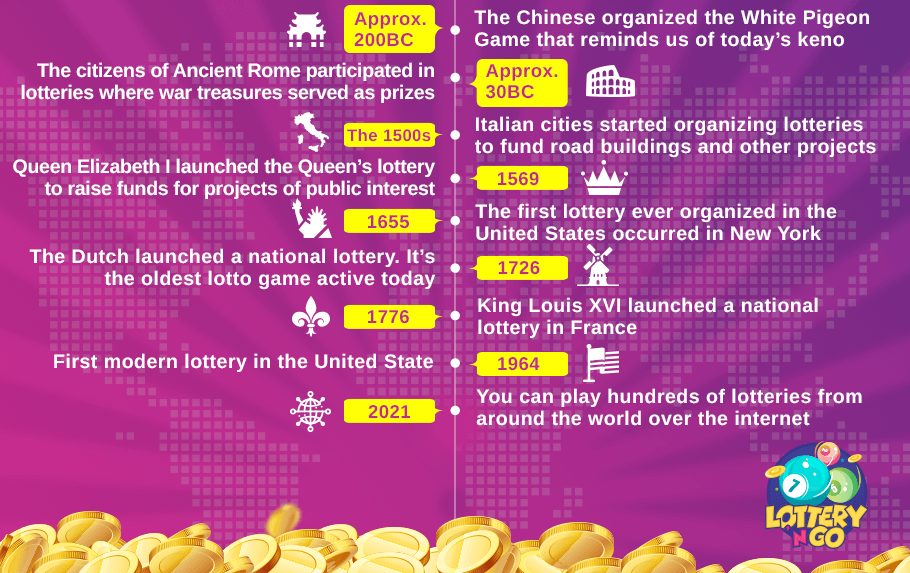 You can find several modern lottery types, including:

Regardless of the lottery size, the entities that want to organize lotto games need to acquire a suitable license. Those licenses should come from relevant government bodies in that country. It’s not rare that the lottery organizers are companies that are run by the state or national governments. However, other organizations are completely private-owned.

While we are talking about lottery distribution, let’s mention that you can play lotto offline and online. The old-fashioned way is offline, which involves heading to the local vendor and purchasing a ticket. You can also buy tickets online via licensed internet lottery vendors. That’s a faster way of buying tickets and gives you access to more games.

Did you know that lotteries aren’t legal in all countries? Islam considers lottery a form of gambling, which is haram. That’s why some Muslim countries, such as Syria, Iraq, and Iran ban all forms of lotteries. Conservative governments, such as North Korea or Belarus, impose a ban on online lotteries. Other countries require online lotto vendors to have a specific permission to offer services in their territories.

❓ What Is the Longest Running Lottery in the World?
If we only focus on the lotto games active today, we’ll see that the Dutch National Lottery is the oldest. It was launched in 1726, and it’s still around for the players to enjoy it. Spanish El Gordo is extremely popular in this country. The game has had annual draws every year since 1812, and it’s a part of the Christmas tradition.

❓ What’s the Biggest Jackpot Ever Won in the History of the Lottery?
The largest jackpots in the lottery history exceeded $1 billion. In 2016, the total grand prize sum in US Powerball was $1.586 billion. That’s the biggest reward ever, but it was split among three winners.

As for the single biggest winner, a lucky player won $1.53 billion on Megamillions in October 2018. The win went to South Carolina, but the lucky lotto participant remained anonymous.

❓ What Can We Expect in the Future for the Lottery?
It’s safe to say that lotteries will be around as long as humanity. Thanks to the internet, you can participate in lotto games from different continents. You can already find online-only lotteries, and that number will likely increase in the future.

The lottery went a long way from the first games to how it looks today. Some things didn’t change. Lotto companies are often government-run, and a portion of the profit goes to good causes and public interests. The games are as fun as ever, too. If you haven’t played the lottery before, now is the right time to start. You can pick from hundreds of games from throughout the world. Don’t hesitate to pick your favorite and join the fun today!